Founded in 2002, the London Festival of Contemporary Church Music has been promoting and performing new sacred music for 20 years. In this lunchtime recital, Artistic Director and Festival founder Christopher Batchelor presents some of his favourite selections from the past 20 years of new sacred music at St Pancras Parish Church.

The Festival’s own professional vocal ensemble, The LFCCM Festival Singers, expands and augments the Choir of St Pancras Parish Church with additional singers from London’s world-class choral institutions. Most members of the ensemble have come from a collegiate background and gone on to study as postgraduate students at one of the London conservatoires. This combination of superb sight-reading and world-class vocal training gives the group tremendous flexibility, enabling the performance of a repertory that spans five centuries: ranging from motets from the Eton Choirbook to new commissions by composers such as Roxanna Panufnik, Michael Berkeley, Cecilia McDowall, Howard Skempton, Michael Finnissy, Gabriel Jackson, Francis Pott, Sebastian Forbes, Francis Grier, Kerry Andrew, Antony Pitts, and many more. 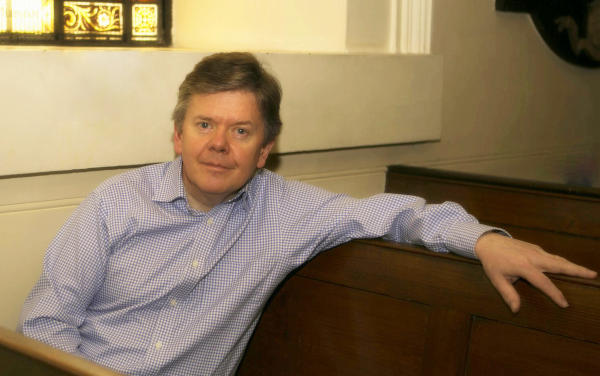 Christopher Batchelor was an organ scholar of Hertford College, Oxford, during which time he was taught by James Dalton. After graduating he moved to Cambridge where, under the supervision of Peter le Huray, he pursued research into 17th century English church music, being awarded both an MPhil and a PhD. During this time he held positions at both Downing and Gonville & Caius Colleges.

Christopher moved to London in 1988, succeeding Christopher Bowers-Broadbent as Director of Music and Organist of St Pancras Parish Church. He has taught at a number of institutions, including University College School and the Royal Military School of Music where he was Professor of Orchestration and Arranging.

Following the re-establishment of the London College of Music in 2006, Christopher became head of the institution, working with many well-known colleagues and establishing a modern conservatoire. His contributions to education and contemporary church music have recently been acknowledged by the award of an Hon. FLCM.

Alongside his performing experience, he has a long-standing practical interest in the organ and was Managing Director of Harrison and Harrison Organ Builders until July 2017; his legacy has been described as “unprecedented”. He continues his association with the organ as an advisor/consultant.

Christopher founded The London Festival of Contemporary Church Music in 2002.